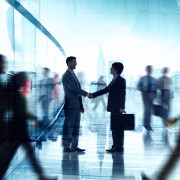 There are now nearly 50% more tech startup vacancies in the UK than last year – and City investment is fuelling that economic surge, new research from Adzuna and Silicon Milkroundabout (SMR) claims this week. Most of those new jobs, adds the research, remain in London and the South East.

The SMR research was released as tech companies gathered at Europe’s leading recruitment event for the 11thtime – and SMR celebrated its fifth birthday by ringing the (digitised) bell at the start of trading at the London Stock Exchange on Wednesday.

Surprise guests at the Stock Exchange reception were chancellor George Osborne and Conservative London mayoral candidate Zac Goldsmith. Osborne said the tech opening was “a sign of the success of the City, but also the whole country.”

“We are here to continue to support your growth, not just from a capital markets perspective,” he told tech businesses, adding that LSE supports broader initaitives like the launch of investor Sherry Coutu’s Scale-up Institute, and the LSE ELITE programme, offering businesses mentoring and investor access.

Silicon Milkroundabout joined forces with Adzuna, the leading search engine for classified ads, for the research, the findings of which they say demonstrates the economic value of City backing for the tech sector. “Startups and venture activity in the UK will create tens of thousands of new jobs in Britain this year,” said the pair.

With over £3bn invested in UK technology organisations last year, SMR and Adzuna say that “startups and established companies alike are on a hiring spree to attract Europe’s top talent”.

The research, conducted April 2016, analysed over 1m UK job advertisements and the hiring patterns of over 1,000 startups and tech companies, to determine the number of vacancies being created. Adzuna then benchmarked that data against its similar studies in preceding years.

The research finds that tech startups around the country are hiring for a total of 17,895 positions, which is up 49% from 12,003 a year ago.

London and the South East region maintain the biggest pull for entrepreneurial employees, says the research. But it adds that the proportion of tech startup jobs is on the rise in other regions, notably Eastern England, North West England, South West England and the West Midlands.

At this weekend’s Silicon Milkroundabout event at Truman Brewery, BBC Digital tops the list of companies hiring for the most roles, with 31 vacancies, evrythng with 24 roles, Cloudreach with 24, Thoughtworks with 22, and Worldpay with 20 roles.

Fashion tech recruitment is also well represented at #SMR11, with Net-A-Porter Group topping the list with 25 roles, with ASOS on 22, Farfetch on 16, Metail on 18 and M&S Digital on 13 vacancies.

Adzuna co-founder Doug Monro said the figures showed that “the technology space in the UK has never been hotter. Startups in the UK are raising money like never before and this is leading to significant job creation around the country and, similarly to the Silicon Valley, UK tech companies are now increasingly able to stand toe to toe with the City competing for Britain’s top talent.”

Silicon Milkroundabout co-founder Cristiana Camisotti added: “The UK tech startup ecosystem is continuing to evolve, with well-funded and profitable companies emerging with a need for top talent and the financial clout to take on the banks and Corporates. Startups and scale-ups are continuing to attract top talent with stock and the excitement of a fast-moving, entrepreneurial environment.”

Silicon Milkroundabout’s twice-annual events, in May and November, attract over 6,000 candidates a year to meet with 400 startups offering 4000+ jobs.

Microsoft to buy LinkedIn for $26B in cash, makes big move into enterprise social...
Scroll to top