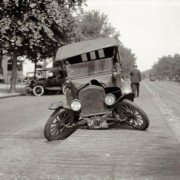 Search Engine Google said it bears “some responsibility” after one of its self-driving cars struck a bus in a minor crash earlier this month.

It might be the first case of one of its autonomous cars hitting another and the fault being self-driving car. The Mountain View, California-based Internet search leader said it made changes to its software after the crash to avoid future incidents.

In a February 23 report filed with California regulators, Google said the crash took place in Mountain View on February 14 when a self-driving Lexus RX450h sought to drive around some sandbags in a wide lane.

The Lexus was traveling at less than two miles per hour, while the bus was moving at about 15 miles per hour came in the opposite direction. Both the vehicle and the test driver “believed the bus would slow or allow the Google (autonomous vehicle) to continue.”  Everyone knows that buses and taxis do not stop for anyone, but it seemed that Google’s software did not know that.

It struck the side of the bus, causing damage to the left front bumper, front wheel and a driver side sensor. No one was injured in the car or on the bus.

Google said in a statement on Monday that “we clearly bear some responsibility, because if our car hadn’t moved, there wouldn’t have been a collision. That said, our test driver believed the bus was going to slow or stop to allow us to merge into the traffic, and that there would be sufficient space to do that.”

The Santa Clara Valley Transportation Authority will investigate the circumstances of the accident.

Google said it has reviewed this incident “and thousands of variations on it in our simulator in detail and made refinements to our software. From now on, our cars will more deeply understand that buses (and other large vehicles) are less likely to yield to us than other types of vehicles, and we hope to handle situations like this more gracefully in the future.”

AdsWizz select Jurupa to execute board level search in Europe